Kinamania: remember the name and discover the impressive story of a most entrepreneurial woman: Kristina Zouein (in Engels) 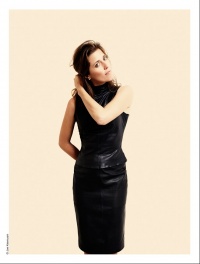 Former designer and production director to the JOHNNY FARAH House of leather accessories, Kristina ZOUEIN spends nearly ten years in artisan workshops before she creates KINAMANIA in 2014. Over the years she develops a passion for crafts and a deep appreciation for makers, which leads her to create KINAMANIA, a brand rooted in meticulous craftsmanship and cultural heritage.
The mania for kinas – in other words the kinamania – began with a line of abarca-inspired flats and is now evolving into lines of traditional footwear revisited with a modern twist.
Kristina lives between Beirut and Brussels. And then…she came to Unizo Brussels to be challenged on her Business Plan…

“I launched my shoe brand in 2015 in Lebanon and moved to Brussels that same year while managing the project from a distance. Last year I decided it was time to take the brand to the next level and launch Kinamania in Europe with the starting point being Belgium; and felt the need for professional support to finalize my Business Plan in order to ultimately raise capital. I was directed towards Unizo and being coached by Bernard Denys turned out to be the most beneficial €150 I could have ever spent and a turning point in the build up of my strategy! Mr Denys is an experienced entrepreneur with a great ear, who was extremely sharp at helping me write an exhaustive business plan with top down and bottom-up forecasting market approaches.”

Her webshop is already online and she’s now preparing the next steps: investor’s pitching

Discover her via following links: